In January 2012 I travelled to Uttar Pradesh, a state in Northern India, to visit the Project Mala schools based at Guria and five other locations in the rural regions around Mirzapur. Although I was there mainly to assist the office staff with a project, I was lucky enough to be able to spend some time with the children and even to teach a class 9 group at the Guria school.

Like everyone who sees the schools, I was completely bowled over by the intelligence and enthusiasm of the children, the dedication of the teachers, and the safe, clean, studious but happy environment that Project Mala provides. Unlike most of the local government schools, Project Mala gives children from the region a real opportunity to learn, to develop, to play sport and to develop the sort of vital life skills that they can take back with them to their villages. As soon as I left I began making plans to return and did so at the beginning of this year, when I saw how new projects have taken shape including boarding facilities at the Guria school and a pre-school for girls at Turkahan.

All of this work inevitably costs money. In some ways, not a huge amount: Project Mala has almost no expenses in the UK while salaries and raw supplies are generally less costly in India, but still of course monthly overheads have to be covered and new projects funded and I'm eager to do anything I can to help make sure this happens.

One of the few things I can do is run - last year I ran the London Marathon and I intended to follow it up with the New York Marathon in November. Sadly the event coincided with Superstorm Sandy hitting New York and the event was understandably cancelled.

I haven't given up though - another year of training has done me good, and this November I will be back in New York and setting off on a run that goes through all five boroughs and finally ends in Central Park. 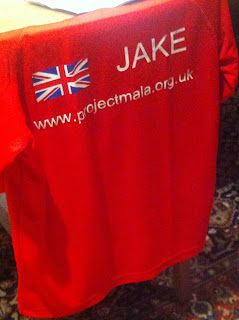 I'll be running in a shirt with the Project Mala website URL on, in the hope of raising some awareness of the organisation, and I'd also be delighted if anyone who wants to, sponsors me on my JustGiving page - all money raised goes directly to funding food, uniforms, building maintenance, teachers' salaries, and other vital expenses in giving Project Mala pupils the best possible education.