A senior pupil at Project Mala school, Guria, explains how she overcame her shyness and gained confidence in speaking English.


When I met Maya first she was a class 8 pupil at Project Mala school Guria and I was in her class to choose the most confident and fluent English speakers to be guides for a group of visiting sponsors from the UK and USA. We were about to have a grand opening of the new school at Turkahan and were planning a programme of events and entertainment for our visitors. The children in class 8 had never had an opportunity to speak with native English speakers before and I was to work with them to prepare them and give them confidence. However, first I had to choose which pupils to use and so I took them in small groups to assess their ability.
Maya was one of those who refused to speak at all. Although all the children had been learning formal written English for some time, and had a knowledge of grammar that would put UK pupils to shame, they seldom if ever had the chance to practise spoken English and many of them were understandably shy at first. Maya could do no more than whisper her name and age and say 'yes' or 'no' and I soon turned my attention to the more confident members of her class.
Within a few weeks these children were transformed. They were able to chat happily with their English speaking visitors, to show them round the schools and accompany them in the minibus, pointing out features of Indian life in the villages around. At the school opening in Turkahan, local journalists covering the event expressed amazement that children from the villages were speaking English so fluently and back at school the other children were also inspired to speak more and to set their sights higher.

Maya remained very shy and silent, however, and I did not realise what an affect the event had had on her. It was only earlier this year that we put on a big event at Guria for past students. Maya was onstage with a microphone as English speaking compere, offering a translation from the Hindi. I could not believe the transformation. She is now one of the most fluent English speakers in the class and her confidence has soared as a result so that she is performing much better academically across all her subjects.

Her story is so interesting that I asked her if she would be prepared to be interviewed. Her English is not perfect by any means, but she is now a confident speaker in her second language and this will stand her in good stead when it comes to further study and finding a job. 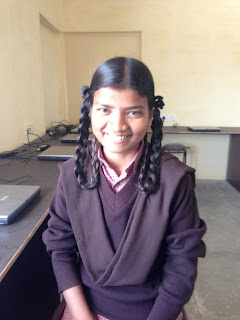 Anne:  So Maya, the other day, you were in charge of speaking English in front of all the guests, and I was thinking when I saw you in class 8 you were very very shy and would not speak at all. What happened?
Maya:  Actually Mam that time I was afraiding so much to the England speaker and they were mm (pause) Actually I was fearing so much to the England people and there was a lack of meaning in front of me so I could not speak that time. And after some time when I saw that there were so many students of my class are speaking English very much and they are very good in English, they can talk to the other (English) people but I was not able to speak that time. Because the matter was that I could not speak in front of them. I was fearing so much and I thought that that time, I thought that I cannot speak in English but when I had gone to the home that time there was my brother at the home. And he said to me, ‘What’s happened? Why are you weeping at home?’ and I said to him that I could not speak English in front of them. So that time he said, ‘You can speak, but if you will have courage’.
That time I thought that is correct and that I should try to speak in English and after some time he said to me, ‘You can join the coaching centre’. And for two months I joined the coaching centre. I could not get something special from there but I get some hints, like as that he said to me that you can learning meaning so much and you can improve your English. And he said to me, ‘If you get the any man you should like to talk with him’.
And when I started that there were so many problems in front of me, but I was – I started to speak. And after some time the teacher met to me and said, ‘You can speak in English, but if you will talk to me nearabout one month’. And then I started to talk with him and after one month he said, ‘You can speak in front of anyone, but you are not a speaker of English. Now you have to try again and again for speaking English’.
Anne:  Mmm, that’s very good advice. And you followed it?
Maya:  Yes Mam.
Anne:  And now you are really an excellent English speaker.
Maya:  Thank you Mam.
Anne:  That’s such a nice story. And now what are your ambitions for the future?
Maya:  Actually Mam when I will get the good marks in High Schools, then my brother have thought that he will take admission in a good school but if I will get bad marks in High School he will be very sad to me. And …(Pause).. before six months I was failing and my study has gone last. And nearabouts two months I am studying and I am trying a lot to do best, but if I will not success again I will try to best.
Anne:  Yup. And you are thinking maybe of studying commerce?
Maya:  Actually I am… I have not heard about it. Actually this is the time of my High School (exams – equivalent to GCSE)
Anne:  So you are waiting for your results?
Maya:  Yes
Anne:  Mmm – very sensible.
Maya:  Thanks Mam. And Sir said to me that I am taking… and we are the students of Babusarai (Local government High School) and our village is the same. And if we will take the commerce we can study both and if any question is coming in our mind we can solve it to meet each of us. Then I have said that I will take the commerce but I have not decided it.
(Not all schools have the option to study commerce. Maya and her classmates have been given helpful advice by our Principal and his staff, but are awaiting their final exam marks  before they choose where they will study for High School – the equivalent of 6th form here.)

Anne: Ok, Well done. Thank you so much.

Posted by Project Mala at 02:58 No comments: