When I visited Turkahan school in February the art project was well under way. A scaffolding made of bamboo and school benches, which looked rather precarious but in fact was absolutely sound, had been constructed and a team of pupils had already made a start. The area to be covered by the frieze had been whitewashed in preparation and a grid pattern drawn on to help the children transfer their drawings to the wall while keeping the proportions correct. 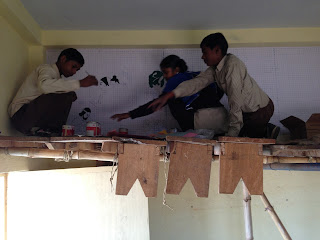 The artist responsible for each painting was in charge with a team of friends to help. All the children were thoroughly engrossed in their work and very, very proud of the responsibility that had been given to them. 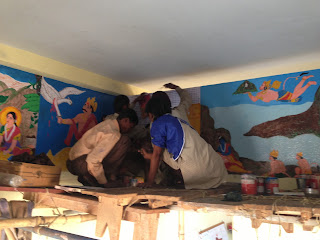 I returned to the school several times over the next few weeks and the painting came on in leaps and bounds.

As the artists gained confidence they worked faster and achieved a really professional result to the delighted amazement of staff, visitors and other pupils. 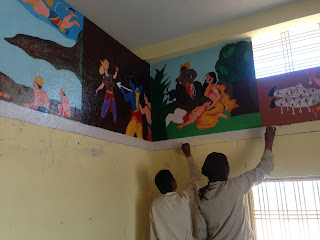 On my final visit before leaving India the frieze was complete, with just the final touching up to be done and the border neatly painted along the lower edge of the frieze.

The art project was all but complete.